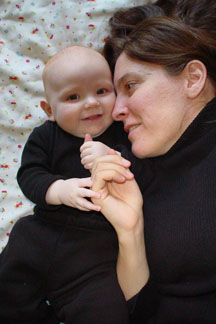 It’s Halloween. Since Max is only 5 months old, he’s not really old enough to participate in Halloween activities yet, so anything special we planned to do with him would have been for our benefit, not his. We could have taken him trick or treating, but he doesn’t eat candy, so we would just be using him to get the candy for ourselves. I wasn’t even planning on getting him a costume, until my friend Val brought out her daughter’s costume from last year and said we could borrow it. I thought, great, we can just dress him in it and take him out to dinner or something. Everyone loves a cute baby in a cute little dinosaur costume, right?

Well, a few days before Halloween I tried the costume on him and it was way too small! No big deal right, because I wasn’t even going to dress him in a costume in the first place. But, I was kind of liking the idea of having a little family Halloween outing, so I began thinking of an alternative to the way-too-small purple dinosaur.

I didn’t want to go out and buy a costume just for him to wear once, so I looked on-line to get some ideas. I found some cute ideas and decided on a skunk. All I needed was a black hooded sweatshirt, black sweat pants and some white faux fur. The fur wouldn’t be permanent, so he could wear the sweatshirt and sweat pants throughout the winter.

I found a black turtleneck bodysuit and black sweatpants, but no white fur. No biggie, I would just use some white felt instead, which I already had. And I also needed some kind of black hat, because the top didn’t have a hood. This is as far as I got. As it grew closer and closer to October 31st, I was running out of time getting the skunk costume together. I thought to myself, maybe he could just be a cat burglar. That way all I would have to do is find a black hat. I didn’t even get that far.

This morning I woke up and dressed him in the black sweatpants and turtleneck, fastened the Halloween bib that Grandma Jacops got him around his neck and we were off. And just for fun, I dressed myself the same way, without the bib of course. I had aspirations of making him a cute costume, but couldn’t quite get it done. And this is totally OK with me. Surprisingly, I let it go without making myself feel bad. Everyone who saw him in his black outfit commented on how cute he was, and it didn’t really matter if he wasn’t dressed up in some cutesy animal costume.

The black outfit and Halloween bib only lasted until lunchtime. Because he drools so much, the bib was totally soaked and his turtleneck fell victim to a leaky diaper. Such is life with Max. And it’s just fine.

Even though we didn’t have a Halloween costume, Todd still took us out to dinner at Casa. And because this is Athens and Casa is the place to be, we got to have a lovely family outing, see some friends and have a little walk on a brisk fall evening. Not a bad way to spend a Wednesday.